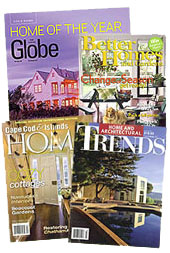 Kitchens and baths completed by Classic Kitchens & Interiors have been published in numerous local and national publications. We take a look back at the last eight years of publication history.